Tradition and the Individual Talent in Architecture

Somewhere in the fifties the architectural profession gave up its discipline and handed it over to art-historians. By that time architects with traditional views were very much oriented to Scandinavian developments and tried to re-establish Dutch traditional architecture. However in the architecture faculty in Delft traditional architecture alltogether had lost its power among the students and was it was put in glass formalin-jar together with restoration and other brick-hugging. Modernism was thought to rule henceforth and the rest had to be history.This night is a brave attempt to get our disciplin back and I hope this battle will end in some success: not only for the beauty of our villages and towns but also for our students that pay a tremendous price to end up with a futile qualification. Let me explain.History is not our discipline, it is a bunch of tools and many many stories. History includes time but it is different –it deals with precedents. 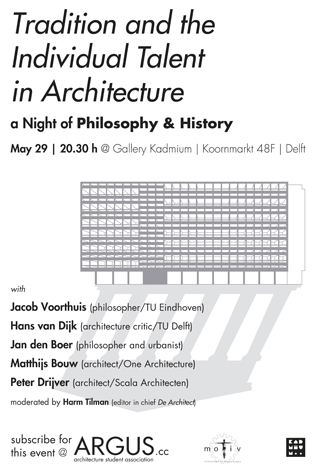 Since we lost the art of battle from man to man, armour is completely strange to us. It is not part anymore of a living tradition.

We recognise shape and size as the counterform of our bodies but we possibly cannot tell what armour is best for what sort of arms or swords.

We have lost the tradition of steel, boiled leather and mail alltogether and we must re-imagine that by research, byfit and experience. Our imagination will fill in the blank spots.

Since building is expensive and labourious we used to learn from trial and error: we build up building traditions of numerous working and proven inventions.

Architecture deals with long lines in time –many buildings are over a century old and many generations where born between its very walls. Architecture has only its beauty, its robustness and its utility to lure the inhabitants into the returning repair of its roof to repaint its window-frames over and over.

Architecture finally deals with conventions: the unwritten language we use in our daily life for the smallest of things. Conventions tell us how to decorate an entrance, how to end the composition of the elevation where it touches the sky. Conventions embody all living traditions we share in our everyday life. Thats the beauty and the relevance of our profession and the only point we can make to regain urgence and authority.

Conventions are open source: you cannot change them but you can add things –small things generally. Things that reflect form-fashion or form-trend are on the long term less relevant additions since they barely influence the archetype.

Since we architects are the only form-givers in the field this is the imaginative part of our work.

Rediscovery of traditional forms in the first postmodern years made way for the most frivolous of forms being modernist or traditional. It opened a brothel of Pandora.

However the more professional attitude cannot  be content with just dillettant freedom. Studying work and writings of architects will learn you otherwise, will teach you sensibility.

Renzo Piano called the architectural profession in this town a game, but a game with discipline otherwise you would be lost. And I would add that architecture is a game where conventions should be defined ánd met in order to make useful, robust and beautyful buildings that will last.

These images are recently built projects that deal with modern building techniques, modern building prices and modern standards of energy-efficiency. Modern typology and construction demands are paramount, but the careful use of architectural form and composition will reward the architect with the praise from users, inhabitants and owners with the small pleasure to see the house and its urban setting on the same time.